So as I was saying in my previous post, there I was all signed up for #sewtogetherforsummer.  Got my pattern, got my fabric, got my sewjo all juiced up after my Rosa success with nothing to stop me.  I cut out my pieces, sewed up the basic dress, checked the fit and… nothing.  It was all gliding along as smoothly as any sewist could hope, I just had no enthusiasm for finishing that dress whatsoever.

The obsession with shirts was still there though, and I was increasingly finding my swipy finger drawn to pictures of the Deer and Doe Bruyere pattern.  I stalked it relentlessly, much like 14 year old me did Kevin Costner.  I was convinced we were meant for each other – that high waist, the A line skirt – all features so flattering for those of us who don’t actually go in at the waist.  And I’d sewn one whole shirt now, so surely I had the skills for a pattern labelled Advanced!

Start with something casual, I thought, that you can get away with as a wearable toile.  A lumberjackie (see what I did there?) style would hide any fitting issues as long as I erred on the large side.  They’re meant to be loose and comfy right?  I found an ultra soft brushed cotton flannel from Minerva Crafts and for a brucie bonus they had it in a pink plaid. When it came down it turned out to actually be Top of the Pops in the 80s hot pink, but happily pink of any shade tends to suit me and my mum was chuffed to bits as she spent most of the 80s trying to talk me into wearing hot pink (teenage me had some confidence issues about wearing neon colours. Wouldn’t bother me in the slightest now!) 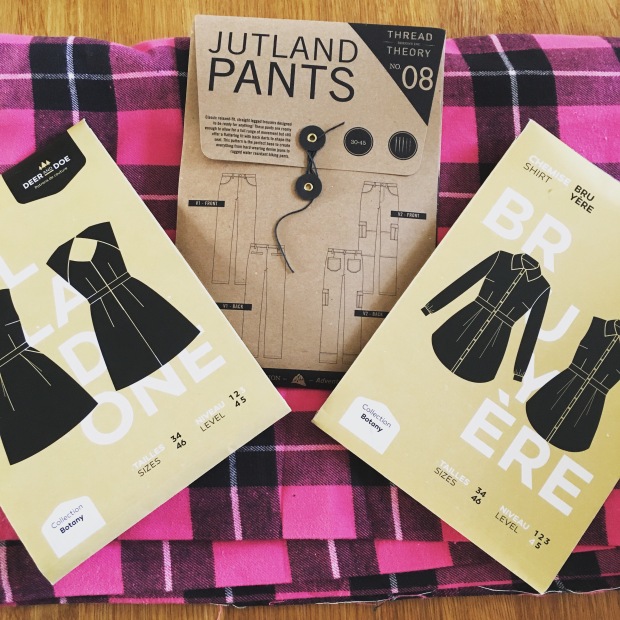 Anyway back to my flannel choice…. Yup that was silly.  I spent hours and hours matching that plaid, without any guarantees that the shirt would even fit me.  The plaid wasn’t even a square check, it was rectangular so had to be religiously cut on the grain to have any chance of matching anything.  Except the flannel was a shifty little beast and wriggled around in all directions.  I quickly learnt to cut everything in single layers and stick pins at every colour change in the check.  I wanted to cut the waist band and placket on the bias like I’d seen on other sewist’s marvellous version, but they ended up being cut at some weird and wonderful mathematically incorrect ﻿angle across the rectangles to simulate an on the bias effect.

I cut a size 42 at the bust and hips, but graded out to a 44 at the waist. I ummed and ahhd about whether to grade out or not as many blogs had said the waist was quite roomy, but the finished garment measurements meant I technically ought to and in the end I decided not not to play size chicken with something I’d invested so much time on. Which was the right call, as it’s a great fit. If (sorry when) I make this another time I’ll make a few more tweaks – lower the bust darts by an inch, lengthen the sleeves by an inch and shorten the skirt by an inch or 2, as despite being a respectable 5’8 I have a short torso and it’s hitting well down my legs. But none of that affects my enjoyment of my hot pinkness as it fits great as it is. I was particularly pleased I didn’t need to make my usual short back/narrow shoulder adjustment, as I’ve got my eye on the belladone dress next and this bodes well for an easy mods ride. I could become quite a devotee of Deer and Doe!

I’d struggled to sew the curved hem of my Rosa shirt, so for the Bruyere I broke out the rolled hem foot. Another right decision. It made for a really great finish and the foot handled the curves way better than my clumsy fingers under an iron can! And my husband didn’t have to shudder with fear and have the ice on standby to treat my burns.  I didn’t follow the pattern’s suggestion of finishing with French seams, but only because I didn’t know how much unpicking I might end up doing to get the right fit. Next time I will. So instead I whacked black thread in my overlocker and overlocked all the seams. It looks great inside, but again next time I’d be tempted to add a waistband facing for a really classy finish. Another first for me (on my sage Mum’s suggestion) was the decision to use snap fasteners instead of buttonholing.

I shamelessly played on the fact that I was finishing the last step on the day of my birthday to get both my best friend and husband involved with the hardware. We had all the instructions and bits out trying to figure out how to do them but once we got the hang of the first one the rest were pretty simple. The others ran away in the end and left me alone with the hammer for a satisfying afternoon of banging things, although my hubby did come back hopefully at the end to see whether there were any leftover for some coats of his that needed repairs. Which was lucky as I’d just put one on the wrong way around so he got to break out more tools to get it off again. (Thank god for YouTube is all I’ll say there)

The many foldings of the button placket took a little bit of head scratching but once I’d mastered the origami they were very satisfying to finally pin and stitch. What a tidy sturdy finish without a single piece of interfacing in sight! ﻿

Conclusion? I’m still madly in love with sewing shirts. I want to make them all! Archer, Melilot, Granville – I’m coming for you! Just as soon as I’ve hemmed and buttonholed that pesky vintage shirt dress… 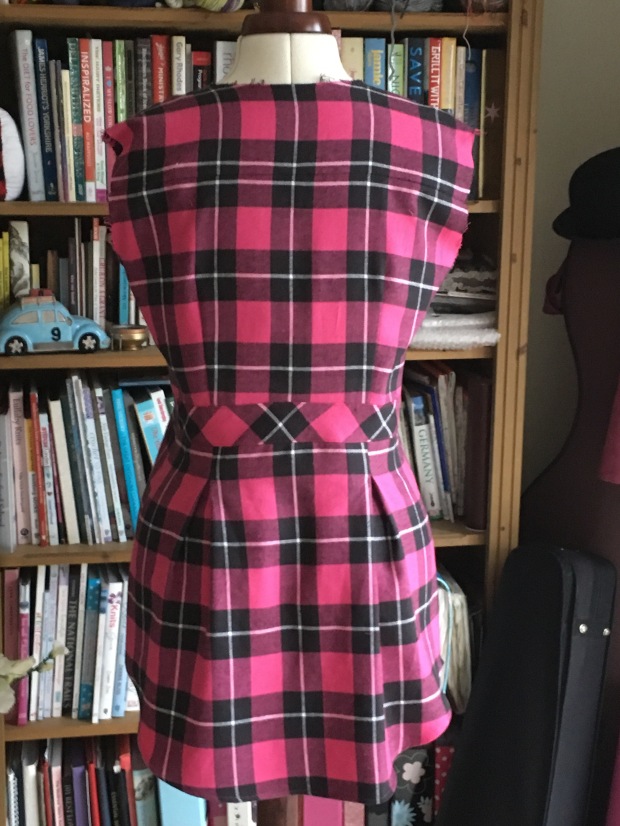 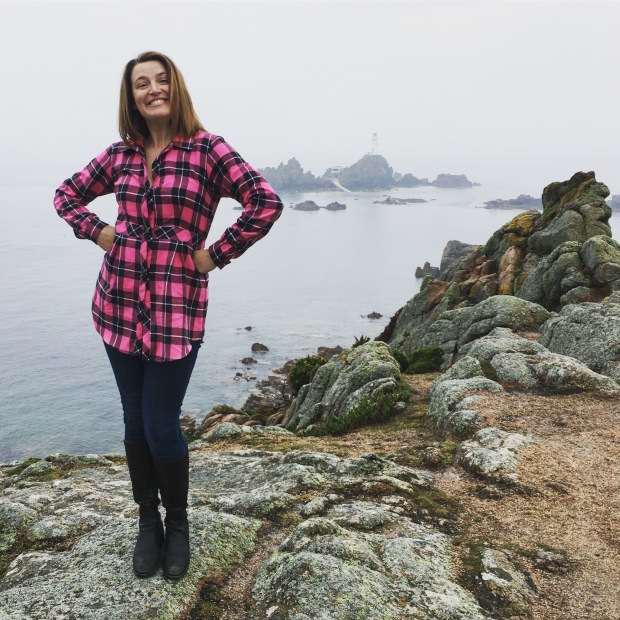 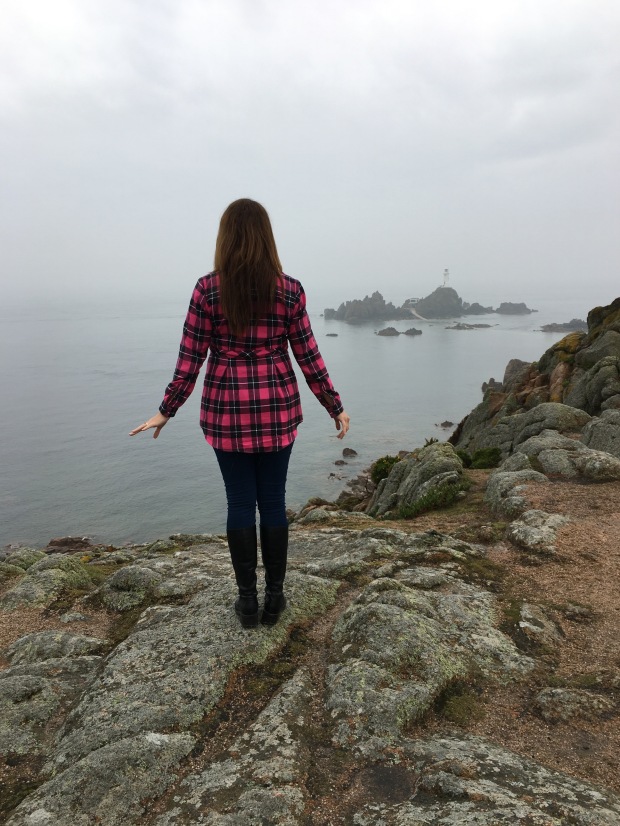