Yes she can!  Is the answer to that I’ve decided.  When the Closet Case Patterns Kalle shirt first came out my immediate reaction was “lovely but not for me”.  I’ve never really worn boxy shapes, there was no way I’d ever be flashing any stomach areas with the cropped version, the tunic version was too long and the advertised “dramatic high low hem” was just a little too dramatic for conservative old me.

But I do love a nice shirt… and some health problems and associated weight gain recently has meant that my TNT Deer & Doe Melilot shirts are somewhat straining at the seams.  I couldn’t bring myself to reprint them in a larger size, so decided I needed a new favourite shirt pattern to start from scratch with.

The one thing about the Kalle though that had always intrigued me was the beautiful curved hem facing on the cropped version.  And it occurred to me that these patterns come with handy lengthen/shorten here lines, that there was nothing stopping me making good use of.  So I did a spot of instadigging to see whether anybody had ever just lengthened the cropped version and it turned out loads of you had had exactly the same thoughts as me about those lines.  And what you also all said after lengthening by a couple of inches was “could have done with a couple more”!

So I split the difference and lengthened mine by 3 inches, determined by the highly scientific process of sellotaping it to the paper pattern and holding it up against me whilst squinting at the mirror.  I didn’t want to go too far and have the back piece too long, since I’d decided that I didn’t want to have to mess about with redrawing the back facing, so would be lengthening the back by the same amount as the front. 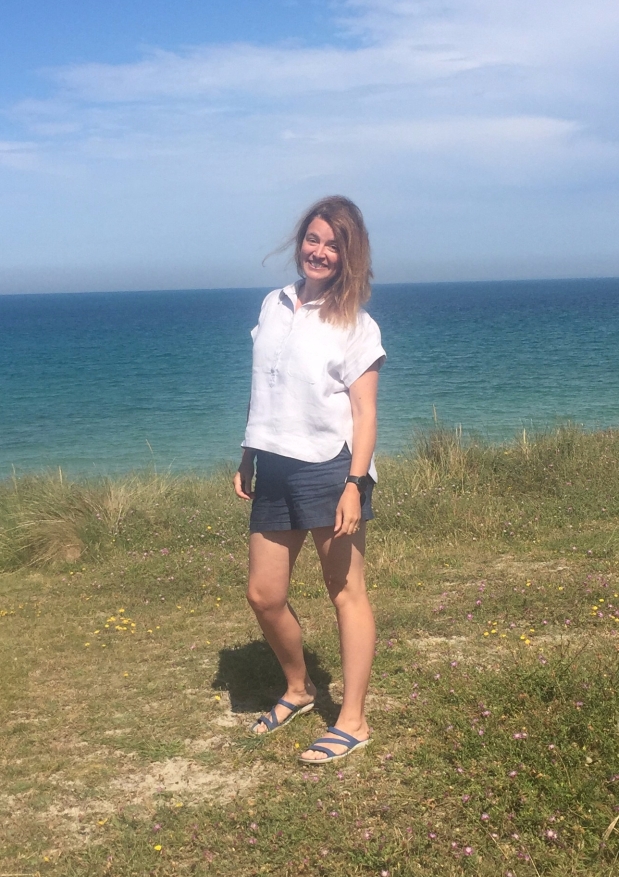 Please ignore the messy hair, the wind always decides to suddenly pick up in just the wrong direction on my photo days!!

In keeping with popular tradition, I’d say I could do with an extra inch (or 2) on the front, but the back is just about perfect length.  And for a first attempt I’m pretty pleased with it.  I’d like to have slightly less of a difference between the front and back lengths, so on my next attempt I’ll put the extra inch in just the front, which will mean I’ll have to modify the back piece and facing as the point where the curves meet will be different to the pattern.  I think I can see a way to do it, wish me luck!

For sizing I debated between making the 12 or the 14, but both the reviews and the pattern instructions indicated that there was quite a lot of ease in the pattern so I went with the 12.  I have narrow shoulders for my 5’8 frame and am frequently swamped by tops, so didn’t want to risk oversizing an already deliberately oversized shirt!  I’m pleased with the shape of the front, but do find it tends to pull down at the back.  A few other reviews mentioned that as well – does anybody have any ideas on how to fix it?

The real breakaway star of this shirt though (and the reason it’s on a constant wear/wash/repeat cycle) is the fabric.  I’m not 100% sure what it is but my best guess is some sort of slubby linen blend.  It’s a very light stone colour with tiny square dots and is just the coolest pleasantest thing to have against your skin on the hot days we’re currently getting here.  I bought it from Trickle Down Fabrics in Arnhem when we were in The Netherlands in May and am absolutely cursing only buying 2m of it.

The buttons are tricky to see but they are funky clear plastic flower shaped buttons from Arrow Mountain.  I’m a floral girl at heart and the idea of subtly sneaking flowers onto a man’s shirt in such a way that only I’d know they were there appealed to me!

The construction didn’t give me any problems.  I’m a veteran shirt maker these days anyway (i.e. can almost put a collar stand on first time without mucking it up) so the only technique that was new to me was the curved hem facing.  For some reason I managed to attach one side perfectly, but did get some puckers in the other side and had to have a second run up at it.  Think I’ll need a few more goes before I properly get my head around how that works but I love the finished result every bit as much as I thought I would.  I did turn it over and topstitch it from the wrong side as I had zero faith in my ability to get the topstitching in the right place at a 6cm distance from the edge of the shirt.  Thankfully my bobbin stitches are quite neat and it looks fine.

So the last of my doubts left about this shirt is… can I pull off the boxy shape?  I passed it through the Mum test yesterday and she says yes, which was a relief as I love wearing this shirt.  It’s so comfortable and cool and relaxed  – basically exactly what I want to be throwing on at the weekeknd with a pair of shorts and messing about on the dunes in! 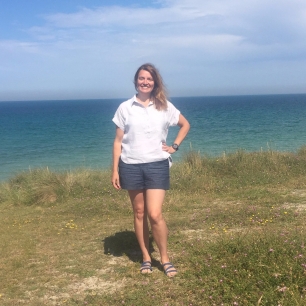 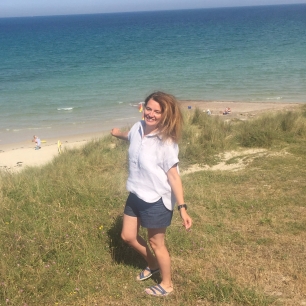 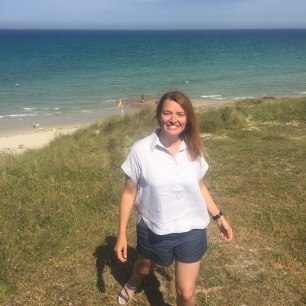