I have a terrible confession to make.  I bought a Janome coverstitch machine in May this year and it’s sat there with the cover on for the last 5 months.  To make my crime worse, I’d begged my family for vouchers for it for my birthday, selling them the dream of how much I needed it and how it was going to utterly revolutionise my activewear sewing (I’d made one pair of leggings!)

I tried to use it I promise… well sort of.  I hemmed one pair of knickers using the prethreaded white cotton it came with fairly successfully.  Then I tried to rethread it myself.  Admittedly, trying to do it without bothering to read the manual wasn’t my smartest move and lead to most of the stitches unravelling.  But even when I did consult the instructions and learnt what steps I’d been missing I still got loads of skipped stitches and I very quickly got frustrated with not being instantly good at it.

So I tried to ignore it sitting on the edge of the sewing table in the corner of my eye and it gathered dust until I put the cover on it. And then that gathered dust too. I busied myself sewing sheer fabrics over the summer and french seamed everything telling myself I wasn’t avoiding the coverstitch machine, I just wasn’t needing it quite at that point.  But I knew the day was coming when it and I would need to have a big sit down together and work out our differences.

That day came when Autumn arrived – the air got crisper, the leaves outside turned orange and I really wanted a pair of jogging bottoms that would allow me to go from lounging around indoors to walking on the cliff paths behind our house without needing to get changed out of my pjs.  Yep, even when I’m being active I’m still lazy!

Enter the Sinclair Patterns Sunset lounge pants. And I’m going to have to be a bit British here about terminology as I’ll be giggling throughout this blog if I have to keep calling them. Thanks to the influx of American tv over the last decade we are becoming somewhat desensitised to constant pants references, but if you want to see even the stiffest upper lip crack a smirk then talking about your fannypack will do it every time! So we’re going to just refer to these as the slouchies from now on.

There are quite a few lounge pants (snigger) patterns out there, but these are the only ones I’ve seen without a cuff at the ankle. Don’t ask me why, but I have an irrational objection to an ankle cuff. I like a nice wide leg for my lounging activities – maybe it’s so the air flows freely and my legs don’t get too hot? Anyway, the Sunsets met my stringent no cuff requirement.

What they also do is scream “use your coverstitch!” at you.  Not in so many words of course, in fact the instructions are for sewing it just on a regular machine with the odd overlocker tip for if you have one.  But the pocket bag is topstitched directly onto the front leg and if that’s not crying out for a contrast flatlock effect on it then I’m not a Coverstitch Coward.

So I had a go… just to see if 5 months under cover had bored the machine into submission.  The practice scraps went ok so I went in on the pockets – and spent the next hour desperately trying not to rip too many holes in the jersey as I unpicked the very visible skipped stitches on my flatlock mess.

By now you’re probably all thinking “why didn’t you just google it you idiot”! Fair point well made.  I eventually did and found this marvellous YouTube review by the Last Stitch. She incredibly helpfully talks through all the settings and where you might be going wrong, including the presser foot pressure and how you might want to switch it from “soft” to “tight” if you’re experiencing skipped stitches.  Hallelujah! Yep boys and girls, that was all my problem was. 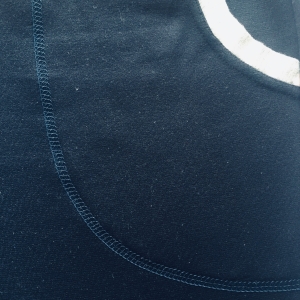 Well after that there was no stopping me.  Actually that’s not entirely true, I did accidentally attach the pocket band to the crotch curve instead of the pocket so had to stop and unpick that, leaving yet more holes in the long suffering jersey, but other than that I was totally on fire.

My waist and hip measurements put me exactly on the US 12 size so I didn’t need to do any grading and the pattern is drafted with petite, regular and tall options so I plumped for tall, since a disproportionate amount of my 5’8 height is in my legs. 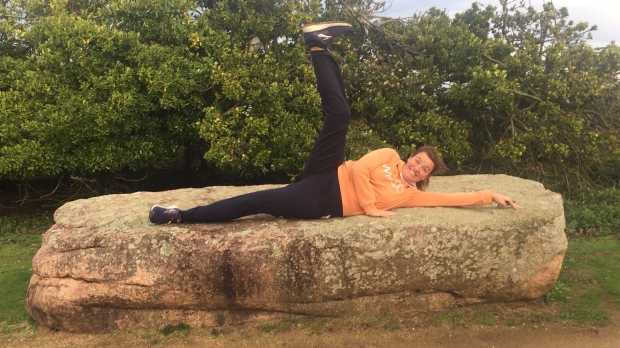 I used a navy ponte roma from Minerva Crafts that I originally bought to make a fancy jumpsuit with, until the penny dropped onto the cuckoo in my head and I realised that I would get a zillion times more use out of comfy bottoms. It’s a very soft medium weight, with a mere 25% vertical stretch and 75% horizontal stretch. The pattern said it was suitable for knits with 30-50% 2 way stretch so that was a bit of a booboo.

Fooled you, I sounded like I knew what I was talking about with that percentage business for a minute there didn’t I?  Naturally I didn’t look at any of that before making the trousers. In fact I only did the stretch test stuff after I’d already sewn them up and discovered that my beautifully comfy slouchies had a tendency to slowly fall down my legs.  At which point it occurred to me to wonder if I’d used fabric with too much stretch. Hindsight as they say…

Luckily all was not yet lost, as in my haste to crack on with some quality evening lounging I hadn’t actually finished the waistband or even bothered to hem them.  I should probably be a little embarrassed to admit that I occasionally wear things before I’ve properly finished them, but I feel like we’re close friends now seeing as you’ve seen me in my outdoors PJ’s with my belly button out and everything.

So the next evening after work I had to postpone my date with the slouchies and rescue them instead.  Rather than attempt to unpick the waistband (and put yet more holes in the fabric) I just cut it off by cutting outside the seam allowance.  The waist line of the sunsets was actually sitting 1 inch above my natural waist so could easily afford to lose half an inch cutting off the waist band.  The flip side of my disproportionately long legs is a shorter than average torso, so whilst I was in the guts of the garment I took the opportunity to shave another 1/2 inch off the botton of the waistband at the same time. I then took the side seams in by 1/4 inch and finally trimmed the waistband to the next size down before reattaching it to the legs. Problem solved!

Or it was until they started to fall down again….! At which point I did what I probably should have done all along and attached elastic to the seam allowance of the waistband. I’d have got a nicer finish if I’d done it at the point the instructions helpfully recommended, but by now I was just pleased to get my trousers to stay up.

In summary I learnt 4 very important things from this project:

Well that’s all from me, I’m off to do some more working out in the lanes!  Thanks for reading! 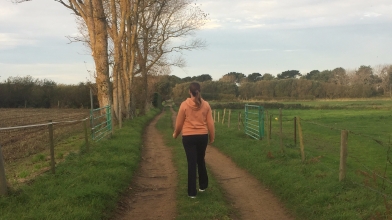